Gluck’s popular opera Orfeo ed Euridice was the headline event over four evenings from June 1 – 5, 2022 at Lismore Castle, the heart of the Blackwater Valley Opera Festival. It is one of the most popular works by renowned composer Gluck, first performed in Vienna in 1762. This love story is based on the myth of Orpheus, a demigod with a talent for music. When his bride Euridice dies, he seeks her soul in the underworld.
Orfeo ed Euridice was directed by David Bolger and conducted by Peter Whelan – one of the most sought-after young directors in the world. The opera featured a fantastic cast, including rising star Wexford soprano Kelli-Ann Masterson, Meili Li, the first Chinese countertenor to have an international career, Irish lyric-coloratura soprano Aoife Gibney, who has performed leading roles on various stages in Europe, and rising stars from the outstanding Blackwater Valley Opera Festival Chorus. This Orfeo highlights video showcases our 2022 opera, which featured new artistic collaborations with the acclaimed Irish Baroque Orchestra, and dancers from the award-winning CoisCéim Dance Theatre.
In 2022, Blackwater Valley Opera Festival welcomed more than 4,200 visitors to 19 events over seven days – with opera, concerts, recitals, education programmes and dining. Thousands of visitors also enjoyed the free lunchtime open-air lunchtime recitals in Youghal, Fermoy, Lismore and Dungarvan; schools night at the opera – a free, full scale dress rehearsal production of Gluck’s Orfeo ed Euridice in the grounds of Lismore Castle, Co. Waterford; as well as classical music concerts and recitals throughout Waterford and Cork. Thank you to all of our performers, musicians, audiences and supporters!
JOIN US NEXT YEAR FOR IRELAND’S SUMMER OPERA FESTIVAL  – Save the date! 30 May – 5 June 2023

Highlights from the 2021 recitals and concerts programme included two sold out performances of Anthony Kearns Gala Concert – A Tribute to Count John McCormack and a series of Bursary Recitals, with award winners from the BVOF Bursary, RDS Collins Memorial Award and Irish Heritage Bursary performing over the course of the festival.

Along with the opera, concerts and recitals, a number of outreach initiatives were developed for the 2021 festival. BVOF partnered with Music Generation to develop a new ‘Discover Opera Trail’ for local primary schools. The festival also included a number of Covid Care Concerts in partnership with the Mobile Music Machine, bringing classical music to care homes across the country. Another first for the 2021 festival was BVOF Open Air – a series of free open air lunchtime recitals bringing a taster of the festival to Waterford and Cork. 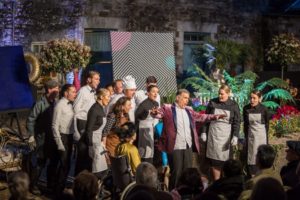 In 2019 Blackwater Valley Opera Festival celebrated its 10th anniversary with a memorable production of Donizetti’s Don Pasquale at Lismore Castle. The story of Don Pasquale revolves around a classic comedic premise: a young couple in love schemes to thwart the inappropriate plans of a pompous old man, who wants to marry the girl himself. What makes the opera notable within this familiar genre is its emphasis on genuine human emotion. Donizetti’s score is graceful and effervescent, as one would expect from this master of melody, but adds an additional level of sophistication to match the comic (yet insightful) proceedings.

Highlights from the Recitals and Concerts Programme included Giovanni Bellucci’s candlelit piano concert with music by Liszt at Dromore Yard.

Building on the legacy of the Lismore Opera Festival the rebrand in 2018 to The Blackwater Valley Opera Festival came as a result of the expansion of the festival programme to a larger number of venues for recitals along The Blackwater in this most idyllic part of Ireland’s Ancient East. The opera also extended for a third night with an opening Gala Night on Wednesday with the magnificent Lismore Castle again playing host to these well received performances.
Artistic Director, Dieter Kaegi, programmed Rossini’s tale of intrigue, comedic mischance, and the triumph of love – and of strong women! L’Italiana in Algeri was premiered in Venice in 1813, and has been delighting audiences for more than 200 years.
Fusing sustained energy, with elegant melodies, the opera tells the tale of Elvira and Isabella, who must together make a plan to ensure that love will conquer all.

The festival presented a new production Donizetti’s much loved comic opera, L’Elisir D’Amore, directed by Dieter Kaegi in the stunning surroundings of Lismore Castle stables and Gardens over two nights. 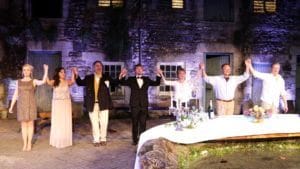 The festival presented the  production of Cosi fan Tutte in the familiar and beautiful surroundings of Lismore Castle’s gardens and stables, accompanied by LOF Chamber Orchestra and sung in Italian and  English. The recitatives, with the text often updated to include contemporary references, were given in English, the arias in the original language.  The stable setting was the inspiration for this year’s updating of the opera which was considered a real coup de théâtre by Michael Dervan in the Irish Times.

The festival presented a totally original production of Mozart’s Magic Flute in a four pole circus tent provided by our friends and colleagues at Fossett’s Circus accompanied by LOF Chamber Orchestra and sung in English. Lismore Opera Festival’s creative team lead by Director Dieter Kaegi collaborated with Fossett’s Circus creative team on aspects of the production. Robert Fossett worked with Dieter on the lighting design and the family run circus led by Marion, Angela and their mother 85 year old Herta assisted LOF costume manager Slawek Narwid to provide authentic costumes and props. Members of the Fossetts circus troupe were also working with the cast to perfect some circus techniques such as juggling and trapeze work.

The Queen of the Night character (Soprano) Kim Sheehan performed some specific circus tricks in a surprise entrance for her renowned aria. The opera featured a mainly Irish Cast of singers and musicians, directed by Dieter Kaegi and were conducted by Italian Maestro, Marco Zambelli. The production also featured members of the Piccolo Lasso Children’s Choir under the direction of Ite O’Donovan.

This year, the festival presented:

The inaugural performance by Lismore Opera Festival. Presented at the new home of the opera, Lismore Castle.

Artistic Director, Dieter Kaegi, directed the cast in the idyllic setting of the stable yard. Fiona Murphy’s Carmen seduced the Don José of Richard Crawley. While Sandra Oman and Deirdre Masterson’s, Frasquita and Mercedes, trifled with Benjamin Russell’s, Dancaire, and Eric Martin-Bonnet’s, Zuniga. David Adam Moore’s Escamillo made a stunning entrance upon a red sports car to a rapturous applause from the audience, while Kim Sheehan captivated us all.